The Leather Daddy and the Femme 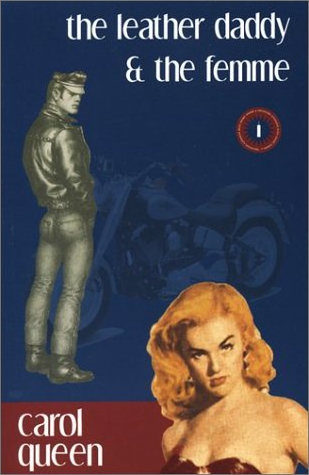 How do I start a review of a book which speaks to me in such personal and intimate ways, beyond being about sex? How do I begin to describe the ways this book has clicked with me? I guess by answering those questions.

The brilliance of the book is that it delves into theory while still having an element of smut in it, mixing the two together in a true Carol Queen-esque way, because in some ways it’s impossible to seperate the smut from the theory and the theory from the smut. The first book I read of Carol Queen’s was Real Live Nude Girl back nearly four years ago when I was still living in Oregon.

I fell in love with her then, realizing how similar we were, wanting to become like her, to explore my own sexuality and look at it through the lens of theory. She was my inspiration for nearly all that I do now, and all I’m working toward including San Francisco and The Institute for Advanced Study of Human Sexuality.

I found Leather Daddy and the Femme

by Carol Queen to be not only wonderful hot get-your-genitals-stirring smut but also an interesting look at gender identities and identity politics. It starts off with the meeting of Miranda/Randy and Jack, then follows their relationship as it progresses, adding in a third partner, Demetrius, and playing with others as well. It is a wonderful queer genderfucking depiction of a gay leather daddy and his boy/femme and the creation of a family.

I found that the identities and relationships within The Leather Daddy and the Femme were some of the closest depictions to what I consider perfect. This wouldn’t be true for everyone, of course, not everyone would have such a personal reaction to the book, dreaming of being in an open and poly-committed relationship or having two different but equal genders that are easy to step into. I found myself identifying in some way with all of the characters and realizing that my dream situation is one very similar to what Jack, Miranda, and Demetrius have, with slight modifications of course.

In some ways the situation in the book is similar to my own, it emphasizes that queerness isn’t restricted to same sex relationships, that there are more ways for males and females to interact sexually and romantically than within a heterosexual model. Something I’ve thought was true for years, but that is difficult for me to describe.

The biggest thing that Leather Daddy and the Femme

did for me, I think, was make me think about my own identity, my own desire for a chosen family (as opposed to born family), my desire for multiple lovers, for queer sex, for my own embracing of my multigendered self. It opened me up to looking at my own gender and sexual identity paths, how I got here and where I want to go from here. Oh, and it also made me wet.

I could probably go on for pages about exactly how it touched me, about what part of which characters I would like to inhabit, what I have thought of due to the book, how it has changed my perceptions and desires… but those things are all for posts previous and to come. Instead, I’d love if you have read it for you to give your reaction to the book in the comments.

Pronouns: they/them or any gender neutral .

I started this blog in 2007 as my personal exploration of all aspects of my life and relationships, including gender, sexuality, spirituality, kink, polyamory, and pleasure.